Women reveal the seven best things about working in tech

Type “women in technology” in the Google search bar and you’ll see words like “we have a long way to go”, “gender pay gap” and “#MeToo.” This is perhaps unsurprising. Earlier this month 20,000 Google employees protested over how Google handles cases of sexual misconduct, gender inequality and systemic racism. Leaving many women to voice: “We’re done with not being taken seriously.”

This sentiment is echoed in the Women in Tech Survey Report 2018 by Ivanti, where 63 per cent of women in technology cite ‘being taken seriously’ as the number one challenge faced by women working in the sector. This is swiftly followed by ‘having no female role model’ (43 per cent) and the ‘gender pay gap’ at 40 per cent. 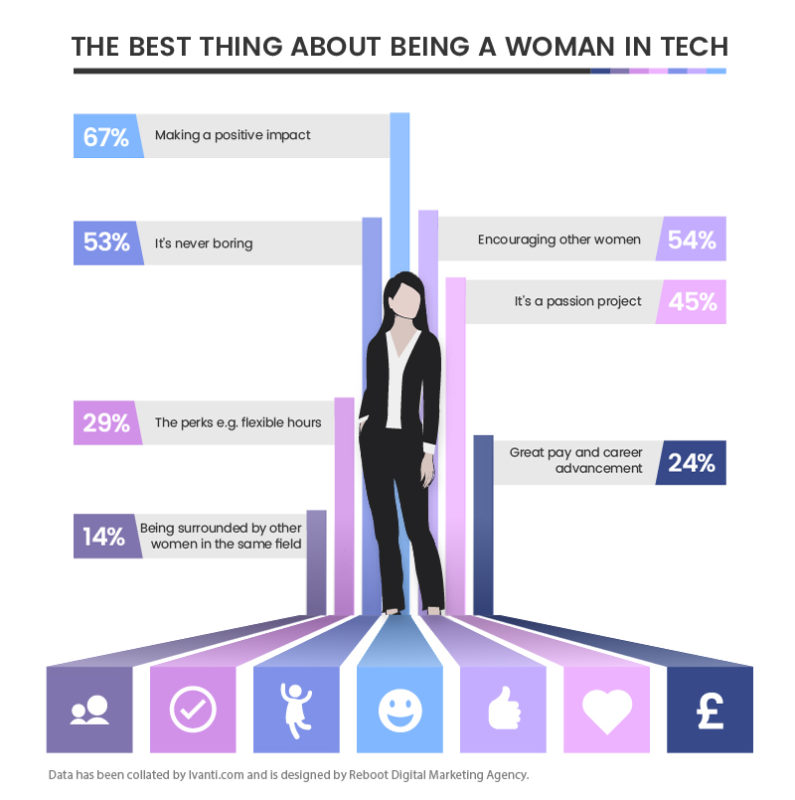 However, in the same search, new words are beginning to permeate. Words like “#EmpowerHer”, “successful women in STEM” and “women advancing technology.” It is the positive Reboot Digital Marketing Agency wanted to focus on.

In analysing Ivanti’s report, Reboot Digital Marketing Agency felt inspired to highlight what women believe is the best thing about being a woman in tech. To achieve this, Reboot designed a graphic to showcase data collated by Ivanti from more than 500 women working in technology across the globe.

Women list ‘it’s never boring’ (53 per cent) and ‘it’s a passion project’ (45 per cent) as other positive things about working in the field of technology. Whereby work is dynamic, engaging and a way to create in myriad ways.

There is also the possibility of ‘perks’ (29 per cent), such as the opportunity to work flexible hours or to hot-desk in a new environment. Not to mention the potential for ‘great pay and career advancement’ which 24 per cent of women champion as the best thing about working in tech.

Lastly, ‘being surrounded by other women in the same field’ is a factor 14 per cent of women believe is the best thing about being a woman in the technology sector. This validates the importance of women in technology networking events, mentorship programmes and STEM programmes. In sharing what they know, or questioning what they don’t, women can inspire and become a role model for other women.

Sindhu Rajoo, SEO and PPC specialist at Reboot Digital Marketing Agency, shares her ‘best thing’ about being a woman in tech in 2018: “Women are creative and natural born leaders who are good at problem solving and handling new challenges. These are reasons that make working in tech exciting for me. I enjoy the idea of discovering unfamiliar problems every day and creating innovative ways to solve the issues. Each day is different, and you never stop learning!”