Trescal will be present at the start of the Route du Rhum – Destination Guadeloupe race, which will run from Saint-Malo, to Pointe-à-Pitre, on 4 November 2018. Trescal, sponsor of the skipper Fabrice Amedeo since 2016, is twice involved in this legendary race as the company also provides its metrological expertise to the IMOCA “Newrest- Art & Fenêtres”s technical team. 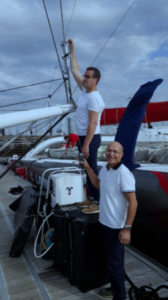 Indeed, José Pires, mechanical expert engineer, and Vincent Therme, mechanical technician at Trescal, have selected and calibrated in their Aix-en-Provence calibration laboratory , a tensiometer to check the forces exerted on the ropes.

On September 28th , Pascal Turcas, Rennes Branch manager and José Pires have operated the tensiometer on board the IMOCA, and were able to detect a slight imbalance on the tension of the shrouds on the port and starboard sides.

“This tensiometer will allow us to better calculate the tension exerted on the maneuvers of the boat in static and dynamic conditions, in particular on the halyards (ropes allowing to hoist the sails) and the sheets (ropes allowing to border, to adjust the sails) this to optimise strength and weight in the choice of ropes. It will also be used to optimize devices such as pulleys, reinforcements on the sails, and to better understand the force induced in the structure of the boat, where these devices are fixed … all this for the sake of optimisation and performance !” commented Yvon Berrehar, the technical director of the IMOCA.

In the coming days, during its sea trials, the boat will test the tensiometer in real conditions.

Trescal will continue to support the skipper after the race because, in addition to these tensiometer measurements, the Group’s Rennes teams will verify and test electrical equipment (current, voltage) as well as external and submerged temperature sensors. A small technical plus that contributes to improving the performance of the boat and that could make a difference on the finish line!