When they are out on the road, bicycles are the greenest machines on the planet.  Now, a University of Huddersfield professor’s expertise is helping to ensure that their manufacture by one of the world’s largest cycle firms is as environmentally-friendly as possible, by aiding a switch to smart factories. 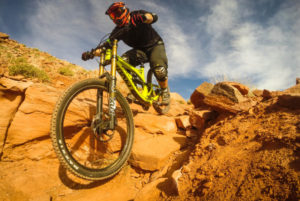 Since 2012, Zhijie Xu, who is Professor of Visual Computing, has formed a research collaboration with the Chinese technology company VisionDragon – a sector leader in machine vision and automation, developing systems for vision-based solutions, which can be used on automated production lines to guide robots and detect errors.

The technology came to the attention of Shanghai-based Phoenix Bicycles.  It has been in business for over a century and now exports its machines to more than 50 countries.

Phoenix are leaders in their sector for introducing new technology, said Professor Xu, who has been based at the University of Huddersfield’s School of Computing and Engineering since 1999.  Now, the Chinese company’s automated factories, using industrial robotics, consumed much less energy, making them a greener proposition.

Computer vision systems are vital in order to guide robot arms on the production lines and to spot defects in components such as wheels.  They can do this much more reliably, quickly and accurately than human operators, said Professor Xu.

In his collaboration with VisionDragon, he used algorithms, mathematical models and embedded visual components to develop systems that could then be incorporated into the Phoenix factories.

Dr Wang was one of the key figures in Chinese technology research and industry who attended a smart technology forum held in the south eastern Chinese city of Shenzen, where VisionDragon is based.  The founder and Managing Director of VisionDragon, Dr Shaohua Ding, is also a prominent figure in the Higher Education sector in China and has published a series of computer vision curriculums and training courses for universities and colleges.

Professor Xu gave a keynote presentation at the event and during his latest visit to his native China – his first degree was from Xi’an University of Science and Technology – he also conducted research seminars at Shandong Agriculture University and at Chengdu University of Information Technology, where Professor Yuanping Xu is an alumnus of the University of Huddersfield.

Professor Xu, who directs the Centre for Visual and Immersive Computing at the University of Huddersfield, was also an invited speaker at the The Twelfth International Conference on Advanced Engineering Computing and Applications in Sciences, held in Athens.  He conducted a tutorial on desktop virtual and augmented reality alongside the other keynote speaker, from Harvard University.