General-purpose robots have plenty of limitations. They can be expensive and cumbersome. They often accomplish only a single type of task. 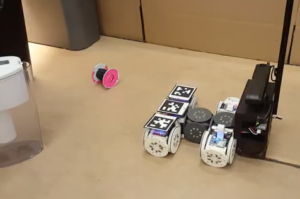 But modular robots – composed of several interchangeable parts, or modules – are far more flexible. If one part breaks, it can be removed and replaced. Components can be rearranged as needed – or better yet, the robots can figure out how to reconfigure themselves, based on the tasks they’re assigned and the environments they’re navigating.

Now, a Cornell University-led team has developed modular robots that can perceive their surroundings, make decisions and autonomously assume different shapes in order to perform various tasks – an accomplishment that brings the vision of adaptive, multipurpose robots a step closer to reality.

“This is the first time modular robots have been demonstrated with autonomous reconfiguration and behavior that is perception-driven,” said Hadas Kress-Gazit, associate professor of mechanical and aerospace engineering at Cornell and principal investigator on the project.

The robots are composed of wheeled, cube-shaped modules that can detach and reattach to form new shapes with different capabilities. The modules have magnets to attach to each other, and Wi-Fi to communicate with a centralized system.

Other modular robot systems have successfully performed specific tasks in controlled environments, but these robots are the first to demonstrate fully autonomous behavior and reconfigurations based on the task and an unfamiliar environment, Kress-Gazit said.

“I want to tell the robot what it should be doing, what its goals are, but not how it should be doing it,” she said. “I don’t actually prescribe, ‘Move to the left, change your shape.’ All these decisions are made autonomously by the robot.”