Sensor systems to give edge to battlefield decisions

Technology that can process vast streams of information from military intelligence sources is being developed by scientists and engineers. 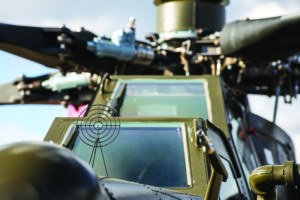 The development will seek to enable operatives in the field to assess their surroundings and identify threats more quickly and accurately.

Newly developed systems will gather information from a wealth of sources in modern conflict, interpreting streams of real-time and historical data.

These will draw upon traditional sensor systems such as radar, sonar, satellites and surveillance cameras alongside newer feeds such as from drones, mobile phones, social media and intelligence analysis. In combination, these will be used to create an information advantage for the modern military.

The £4 million project is funded by the Ministry of Defence (MOD) and the Engineering and Physical Sciences Research Council.

Commenting on the collaboration, Professor Mike Davies from University of Edinburgh’s School of Engineering said: “We’re aiming to give military personnel access to the most useful information, with minimal overheads. The rapid growth of modern sensing and communication technology represents a potential threat in the hands of our adversaries, but there is a real opportunity to exploit new processing and machine learning techniques to gain an information advantage.”