From 19 December to 21 December, a series of reported sightings of drones around Gatwick caused hundreds of flights to be cancelled and an estimated 140,000 passengers to be stranded. In a similar incident on 8 January at Heathrow, sightings of a drone temporarily halted flights. Here, Oleg Vornik, chief executive officer of DroneShield, discusses the sensors available to detect drones and prevent such disruption from happening again

The recent Gatwick and Heathrow incidents have brought to the fore the threats caused by drones. In the industry we call it the three Cs – the Careless, Clueless and Criminal use of drones. With the rise of the threat, comes the need to accurately detect and (where legally possible) defeat the drones. This article discusses what to look for when it comes to such sensors.

The main drone detection methods today include radar and radio frequency (RF) sensors. Acoustics is not discussed due to low reliability of current technologies, while cameras/electro-optics are suitable for identification but not detection, due to trade-off between field of view and distance.

No future-proof “silver bullet” exists and the role of the counterdrone systems and manufacturers is to keep up with the drone technology and evolve with it. The solution is lots of “lead bullets”. 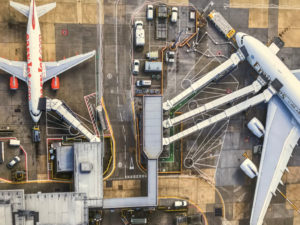 What to look for in a radar

A radar is effectively a motion tracker. Key parameters, in simple terms, include:

– Resolution: the radar needs to have sufficiently fine resolution to detect small drones (DJI Phantom grade and below), at meaningful distances (1km+). Numerous radars have been designed to detect large shiny metal objects (aka planes, helicopters) and are less suited for detecting small, carbon body objects flying closer to the ground (drones)

– Vertical angle: a lot of radars on the market are 10-30 degrees, meaning significant blind spots, especially as the drone gets closer – as close to 90 degree vertical coverage as possible should be the target

– 2D vs 3D: 3D radar has several advantages, including giving elevation data on the target, as well as the ability to reduce clutter but filtering objects past certain heights (thus eliminating ground based false alarms)

– Portability: unless a fixed installation, formfactor and ability to mount relatively quickly and easily on a mast is important

– Moving vs fixed panels: less moving parts is preferable, as this reduces wear and tear and the potential for damage.

What to look for in a radio frequency (RF) sensor

RF sensors work for the most part by matching drone communication protocols to a signature in the RF sensor library. Multiple drone models sharing same protocol (eg LightBridge, Occusync etc) will map to the same signature. The desired features are:

– Reliable mapping protocols with a large RF library, to give large probability of detection and low false alarm ratios (note: certain false alarms such as IP cameras, may be unavoidable, but should be able to be whitelisted by the software)

– Azimuth and vertical coverage angles (similar argument to that for a radar, as mentioned earlier)

– RF DF (direction-finding) capability – as opposed to omnidirectional or “sector” alarms. RF DF gives a narrow beam (a couple of degrees) that can be used to point in the direction of the drone, and also triangulate in a reasonably precise manner, with two or more RF sensors. With RF sensors generally much longer reaching than radar (up to 5km in a low clutter scenarios), this ability to triangulate on a target without a radar is a significant advantage from a cost perspective

– Passive nature – no interference with other devices, and more difficult to discover by “enemy forces” through RF emissions.

It has generally been accepted that soft kill is the better solution due to lesser collateral damage.

Jammers are considered a superior technology to “hacking” as they are a universal protection – targeting bands on which the drones operate as opposed to relying on having a library of hacks for various communication protocols, each of which can be closed as the manufacturers continue to make the communication links increasingly secure.

The jammer works by sending a strong signal on the same frequency band as the drone uses to communicate with the controller and GPS satellite, forcing the drone to go into a pre-set emergency protocol. This generally involves flying back to the starting point if the GPS connection remains available or landing on the spot is the GPS linkage is also severed.

The drones today communicate on 2.4Mhz and 5.8Mhz bands for the most part (for both navigation and video), with some drones utilising 433Mhz and 915Mhz bands. These are considered “unallocated” bands across the world (as opposed to cellphone or emergency broadcast frequencies), and drone manufacturers (along with WiFi, radio frequency-controlled toys, radios etc. manufacturers) are required to stick to those bands by law. Changing the communication band “in a garage” is very difficult for a non-State agent (unlike, changing blades/engine or adding custom payloads).

GPS/Glonass jamming is also helpful as an option to trigger the aforementioned “emergency landing” mode.

A common question arises as to what happens to “autonomous” drones. Severing their RF links will cut the video feed to the operator immediately, and jamming GPS will trigger emergency landing, similar to the normally navigated drone.

An easy to set up, understand and use control console is critical in an environment where the user is not expected to be deeply technical. Good control systems combine the ability to work completely standalone, and also connect to a cloud for updates and remote assistance if required, in a secure manner.

This report does not constitute legal advice, and readers are urged to seek their own advice on legal restrictions regarding purchasing and using counterdrone technology.