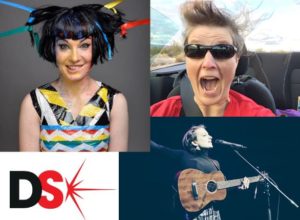 With a brand new title for 2019, to reflect its originator, The DesignSpark Podcast will feature a cocktail of fun facts, exuberant stand-up, outlandish sketches and foot-tapping songs, giving a comedic look, in the style of BBC Radio 4’s Now Show, at some of the hottest topics in technology.

Robot Wars judge Dr Lucy Rogers, and award-winning comedians Bec Hill and Harriet Braine, will return to explore the ludicrous side of modern technology over six 25-minute episodes set to be released in spring 2019. The live-audience format takes influences from both BBC radio and traditional podcasts, with a mix of informal conversation, scripted comedy and spontaneous banter.

While the first series delved into the lives of great inventors from the past, Series 2 –The DesignSpark Podcast – will explore the humorous side of a range of talked-about topics, from AI and robotics and space exploration to augmented human experiences and big data.

DesignSpark Community Manager Leonie Clayson said: “Lucy, Bec and Harriet are a class act, whose unique light-hearted take on some of today’s awe-inspiring technology trends will either reassure us that we’ll all get through it one piece, or that the world will end horribly! What’s certain is that we can look forward to six episodes of hilarity and insight.”

The DesignSpark Podcast 2019 series will be recorded before a live audience at the Rosemary Branch Theatre (http://www.rosemarybranchtheatre.co.uk/) on the evenings of Tuesday 19th, Wednesday 20th and Saturday 23rd March 2019. Tickets are available now at https://www.tickettext.co.uk/why-did-the-chicken/. The show will be released on iTunes, Podbean and Spotify shortly afterwards. Please follow @DesignSparkRS for updates.

The DesignSpark Podcast is being produced by an award-winning team from Why did the Chicken? and written by the cast alongside contributions from a range of established and emerging writers.