RS Components (RS) has put out a final call for entries to EW BrightSparks 2019, an initiative that searches for and highlights the brightest and most talented young engineers in the UK today. 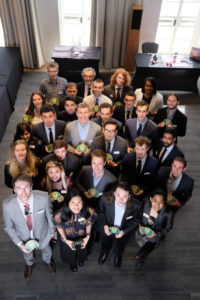 Open to nominees based in the UK and aged between 16 and 30, the closing date for this year’s nominations is Thursday 28th February 2019. Nominations can be submitted via www.electronicsweekly.com/brightsparks/ either by the nominee or a third party.

For the third successive year RS is partnering with Electronics Weekly to run the initiative, which as in previous years is not limited to just one winner. It is designed to celebrate a group of young engineers who could already be making a difference in the first years of their working life or may still be in education and showing great promise toward becoming the next generation of engineering leaders and innovators of the future.

“The BrightSparks programme is one of many initiatives pursued by RS to address the critical skills gap we have in our industry by helping to nurture the next generation of engineers that will be required to grow the electronics sector in the UK,” said Lindsley Ruth, CEO at Electrocomponents. “As we approach the deadline for nominations for this year’s programme, we are keen that as many deserving nominees as possible take the opportunity to enter. Gaining a BrightSparks award has proven to be a major stimulus for many of the programme’s award-winning engineers from 2017 and 2018, spurring them on to new heights and to achieve even greater things.”
Previous BrightSparks award-winners from 2018 and 2017 include:

Abdulrahman Albar (2018) has designed and developed an almost entirely 3D-printed concrete extrusion system, as part of his work towards a PhD at Brunel University. Since winning a BrightSparks award, he has established Amabz 3D, which works with startups, students and schools to help them use 3D printing to bring their ideas and innovations to fruition in a much cheaper and faster way than traditional methods.

Gregor Birrell (2018) is studying for a MEng in electronics and electrical engineering at Edinburgh University. Since receiving the award, he has become President of two university societies: Edinburgh University Formula Student, which builds racing cars from scratch; and Project InnSpace, a student-run makerspace. He recently secured a position at Mercedes AMG High Performance Powertrains, which develops engines for the Formula 1 and Formula E teams.

Josh Bowen (2017) is a technical blogger for DesignSpark (https://www.rs-online.com/designspark/user/ElectricJosh), RS’ engineering community, and has created a series of project articles ranging from homemade musical instruments to robotics and computer vision using the Raspberry Pi. This year sees him working on larger and more functional projects to solve modern challenges using new technologies in the fields of automotive, sustainable energy and remote IoT systems. Josh also works for He-Man Dual Controls, which makes dual-control pedals for driving instructor vehicles. He was recently invited to judge the 2018 Elektra Awards.”

Oishi Deb (2018) is a software engineer at Rolls Royce and, by immersing herself in internships, placements, computer courses and national and international hackathons, as well as being actively involved as a STEM ambassador, she has gathered a number of accolades recognising her successes in technology. Most recently, Oishi has secured a place on the Sky Women in Technology scholarship programme, which has awarded her a grant of £25,000 over 12 months to develop her project on machine learning.

Josh Elijah (2018) has founded BotBlox (https://www.botblox.io/), a new company that sells SwitchBlox –the world’s smallest robot hardware. In addition, he has gained excellent reward as a freelance robotics engineer and has been offered the position of Director of Hardware at Standard Bots (https://standardbots.com/), a New York-based robotics company.

Michael Gucluer (2018) is an electronic engineering undergraduate at the University of Warwick. He has been awarded several bursaries including the Lloyds Bank Scholarship and the Royal Television Society’s Technology Bursary. He volunteers at the Coventry Foodbank via a project called Resilience and is a group leader for Warwick Volunteers’ Fun with Numbers project. He is also a Year 1 ambassador for the Warwick Engineering Society, the largest STEM society on campus.

James Henderson (2018) has led the design of an electronically scanned radar unit operating at millimetre-wave frequencies, applicable to autonomous ground and air vehicle monitoring and control. He has also set up a specialist interest group at Plextek (https://www.plextek.com/) to focus on the design and development of mm-wave electronic systems.

Yi Chen Hock (2018) was the youngest nominee of the year – aged 17 at the time – and is now doing a year in industry with SP Energy Networks and has received an offer to study engineering at the University of Cambridge, starting in 2019.

The winning entrants will be announced on Thursday 2nd May 2019.

This year’s programme is being supported by the IET and by leading manufacturers HARTING and TE Connectivity. Further information on BrightSparks 2019 is available on the RS website at uk.rs-online.com/, search BrightSparks.