Scientists from the University of Portsmouth have been investigating nutrient concentrations in the Upper River Itchen, in Hampshire, UK, on behalf of Salmon & Trout Conservation (S&TC) to better understand where phosphorus is coming from and how it is impacting river ecology. The work has been ongoing for over three years and Lauren Mattingley, Science Officer for S&TC says: “Continuous monitoring of phosphorus has improved our understanding of nutrient dynamics in the Itchen. So far, the results from this monitoring have influenced the lowering of discharge limits from watercress companies and trout breeding farms. 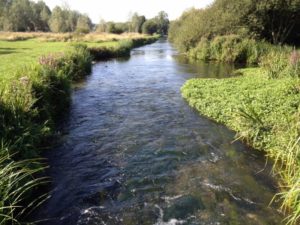 “The behaviour of phosphorus in our rivers is relatively poorly understood, and this is often reflected in water quality standards that, in our opinion, lack the scientific evidence to adequately protect the ecology of the UK’s diverse water resources. Research like that which we have commissioned on the Itchen is essential to set informed phosphorus permits to protect our water life.”

The Itchen is a world famous chalk stream; renowned for its fly fishing and clear water. Designated a ‘Special Area of Conservation’ the river supports populations of water-crowfoot, Southern damselfly, Bullhead, Brook lamprey, White-clawed crayfish and otters. The upper river does not suffer from wastewater treatment plant discharges, but does support two watercress farms, which have been the focus of initiatives to reduce phosphate concentrations.

S&TC is the only UK charity campaigning for wild fish and their habitats. The organisation’s goal is for UK waters to support abundant and sustainable populations of wild fish and all other water-dependent wildlife. Within its ‘Living Rivers’ campaign S&TC is seeking to tackle two of the major causes of poor water quality – fine sediment and phosphorus. The Itchen is therefore being treated as a pilot river for their water quality monitoring initiatives. 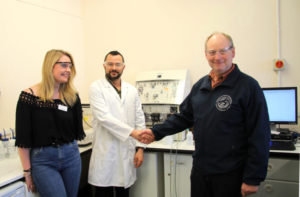 Phosphorus in fresh water is a major concern globally; mainly because of its role in the formation of algal blooms and eutrophication, which have a harmful effect on water quality and habitats. Under certain conditions, raised phosphate concentrations contribute to the proliferation of nuisance phytoplankton as well as epiphytic and benthic algae. Diffuse sources of phosphate include storm water and agricultural run-off from land, and point sources include septic tanks and wastewater discharges from industry and sewage treatment works. While soluble reactive phosphorus (SRP) is the main concern, because of its availability for aquatic organism growth, other forms of phosphate such as particulate phosphate can contribute to nutrient enrichment.

Efforts to improve the quality of water bodies in the UK have been underway for many years. The EU’s Water Framework Directive (WFD) required the UK to achieve ‘good status’ of all water bodies (including rivers, streams, lakes, estuaries, coastal waters and groundwater) by 2015, but in 2012 only 36 per cent of water bodies were classified as ‘good’ or better.

In 2013 the UK Technical Advisory Group (UKTAG) published recommendations to revise the standards for phosphorus in rivers, because the standards set in 2009 were not sufficiently stringent – in 75 per cent of rivers with clear ecological impacts of nutrient enrichment, the existing standards produced phosphorus classifications of good or even high status! DEFRA, therefore, revised the phosphorus standards to lower concentrations. However, the SRP concentration limits vary widely according to the location and alkalinity of the river.

Recognising a gap in the understanding of the relationship between phosphorus and aquatic ecology, S&TC has a unique agreement with the Environment Agency (EA) in Hampshire in which key environmental targets have been established for the Rivers Test and Itchen to help drive ecological improvements. The agreed targets are set around the number of key water insects that should be expected in a 3-minute kick-sweep sample. The targets are for the middle and lower reaches of the catchment to support at least 10 separate mayfly species and 500 freshwater shrimps (Gammarus) – all of which are susceptible to different forms of pollution so their presence provides an effective measure of the environmental health of the river.

S&TC has also conducted research investigating the effects of fine sediment and SRP on the hatching of the blue winged olive, Serratella ignita (Ephemerellidae: Ephemeroptera) a crucial component of the aquatic food chain. The results found that a cocktail of SRP and fine sediment at concentrations exceeding those found in many UK rivers (25 mg/L fine sediment and 0.07 mg/L phosphate) caused 80 per cent of the eggs in the experiment to die. This work was unique because it showed environmental damage caused by phosphorus beyond eutrophication.

Five automatic water samplers have been strategically located on the river each collecting daily samples. This generates 120 samples per 24 day cycle, which are collected and transferred to the laboratory in Portsmouth. The samples are split into three for the analysis of Total Phosphate, Soluble Reactive Phosphate (SRP) and Total Dissolved Phosphate (TDP). To cope with such a high volume of work, the laboratory in the University of Portsmouth’s School of Earth & Environmental Sciences employs a QuAAtro 5-channel segmented flow autoanalyzer, from SEAL Analytical. “The QuAAtro has been in heavy use for over 9 years,” says Senior Scientific Officer Dr Adil Bakir. “It has been employed on a number of academic and commercial research projects, and is also used for teaching purposes. As a 5-channel instrument, we are able to study phosphate, nitrate, nitrite, ammonia and silicate, but our work on the River Itchen is focused on the different forms of phosphate.” 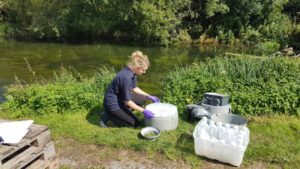 The University of Portsmouth’s Environmental Chemistry Analytical Laboratory provides analytical and consultancy services for businesses, universities and other organisations. Dr Bakir says: “Using the QuaAAttro we are able to analyse diverse matrices including river water, sea water and wastewater, and with automatic dilution and high levels of sensitivity, we are able to measure a wide range of concentrations.”

The analytical work undertaken by the laboratory at the University of Portsmouth has greatly improved the understanding of the ecology of the River Itchen and thereby informed the development of appropriate discharge consents for the two watercress farms. Effective 1st January 2016, new discharge permits were issued by the Environment Agency that set limits on phosphate discharges to the River Itchen system. For the Vitacress Pinglestone Farm these limits are set at 0.064 mg/L and are measured as an annual mean increase compared to the inlet sample.

S&TC now works closely with Vitacress, monitoring immediately downstream of the discharge so that the effects of the new discharge limit can be effectively assessed.

Looking forward, Lauren says: “The lessons that we have learned on the Itchen are transferrable, and do not just apply to chalk streams. All rivers have their issues and inputs, so proper diagnosis and understanding of how these inputs shape the biology is essential to the successful restoration of degraded systems.

“In an ideal world phosphorus targets would be bespoke, on a river by river basis, and determined by tailored research and proper monitoring.

“River ecology is impacted by a wide variety of factors and whilst nutrients represent a serious risk, it is important for us to understand all of the threats, and the relationships between them. In summary, without high-resolution monitoring, river standards and river restoration efforts will be blind to their consequences.”