Renishaw has teamed up with the Bristol Music Trust charity to combine science, technology, engineering and maths (STEM) and music education for children in Bristol, UK. As part of the collaboration, Renishaw is demonstrating the role that fun and creativity plays in engineering by supporting Beat Lab, an interactive music-tech initiative. The company is also supporting the Trust’s ‘Transform the Hall’ project by sponsoring an education room. 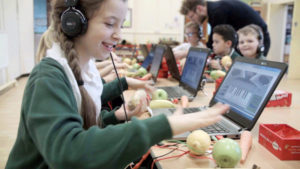 A recent Engineering UK report has forecast that the UK needs 1.8 million new engineers and technicians by 2025 to fill the skills shortage. Renishaw hopes that by combining music and creativity with STEM education, young people will be more likely to take STEM subjects at GCSE and A level, helping the UK to achieve this target.

In 2015, Renishaw and Bristol Music Trust began a one-year trial of a music-tech initiative, Beat Lab. The programme gave children, aged seven to 14, the opportunity to design and make musical instruments from fruit and vegetables. This was achieved using circuit boards and conductive ink to complete electric circuits.

Due to the success of the trial, Renishaw announced in 2016 that it had extended its partnership with Bristol Music Trust by four years. The two companies continue to run Beat Lab, educating approximately 800 pupils each year.

“It is common for engineers to say that they remember a fun experience early in life that led them to their career choice,” explained Chris Pockett, head of communications at Renishaw. “We think that by making STEM education more fun and creative, we can help the UK to meet its target of 1.8 million new engineers and technicians by 2025.”

“Renishaw understands the importance of developing the skills, interests and aspirations of young people, a vision which is at the heart of the Trust,” commented Louise Mitchell, chief executive of Bristol Music Trust. “We hope that by providing an enjoyable and creative way for young people to learn about music and STEM topics together, the Beat Lab programme will lead to an increase in the number of students taking music and STEM subjects at GCSE and A level.”

Researchers at the University of Bristol began evaluating the Beat Lab scheme in 2016 to measure the impact that the programme is having on the aspirations of young people. Already, results suggest that students are becoming more interested in STEM subjects.

As well as supporting Beat Lab, Renishaw was the first company to sign up to support the transformation of Bristol Music Trust’s much-loved music venue, Colston Hall. The venue helps to enrich Renishaw’s local community, where many of its employees live.

The transformation, named Transform the Hall, is a £48.8 million project that will enhance the cultural opportunities the Hall brings to Bristol. The transformation will include a new Renishaw-sponsored education suite in the building’s Victorian cellars, which will be opened for the first time in 100 years. The suite will be used to combine STEM and music education for local children.

In a recent video about Beat Lab, children shared their thoughts on the programme. One pupil explained that his fruit-powered piano made a sound because it was made of a conductive material, another learned that their body is an electrical conductor and one pupil concluded that “science is the best thing ever.”