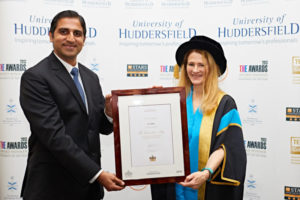 He made a major success of the move, with exceptionally high marks in his Engineering and Control Systems MSc.  This has earned him a Chancellor’s Prize, awarded annually to an elite group of the best performing students.

He is going to stay on at the University of Huddersfield, studying for a doctorate in the field that was also the focus of his Master’s degree.  He researches the sensors that are now used in aircraft, cars and countless other machines, used for fault diagnosis and early detection of problems, therefore increasing reliability and lowering costs.

For his PhD – supervised by Dr Naeem Mian and Professor Andrew Longstaff of the University’s Centre for Precision Technologies (CPT) – Ali will examine different types of sensors, including devices that can detect and monitor temperature, acceleration, displacement and pressure, aiming to boost their reliability.

It was the wide-ranging scope of the Engineering and Control Systems MSc, plus strength in metrology research, the presence of the CPT and the Engineering Control and Machine Performance Research Group that led Ali to choose the University of Huddersfield for postgraduate study.

His first degree was at Pakistan’s National University of Sciences and Technology (NUST).  Then he had his stint working on aerospace avionic systems at the Pakistan Aeronautical Complex.

To broaden his knowledge and expertise, Ali – now 29 – decided to travel overseas to study his chosen field of metrology.  He is delighted he chose the UK and the University of Huddersfield.

“The main purpose of studying here is the education, but I also like the openness of a society in which anybody can progress.”