A new software feature leverages the power of the RT-Range to save time and effort when multiple sensors need to be validated.

Quicker and easier sensor validation. That’s the promise of a new software feature called Multiple Sensor Points, which is now available to anyone using the RT‑Range system to evaluate RADAR, LiDAR or vision-based sensors. The new feature works by allowing the RT-Range to perform its own detection tests based on real-time data, removing the need for engineers to check if targets are visible to the sensors being tested.

The new feature is particularly suited to ADAS applications such as cross-junction, blind spot detection and park-assist, which often need to be validated using multiple sensors and multiple targets. That’s because in addition to providing real-time verification of which sensors can see polygon-based targets, the RT-Range also generates several new measurements. 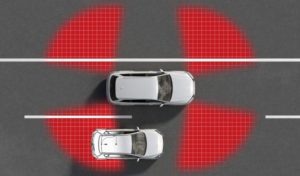 The new measurements generated by Multiple Sensor Points are; range from sensor to closest point on target polygon, the percentage of the sensor’s view that is occupied by the target and the percentage of the target that is visible to the sensor. Whenever a target enters a sensor’s detection area, these measurements are logged internally, but they are also output in real-time via CAN and Ethernet along with the RT-Range’s existing measurements, where they can be logged by external data acquisition equipment.