Formula Student, a student engineering competition organised by the Institution of Mechanical Engineers, will see more than 3000 participants from over 25 countries take part in the event which returns to Silverstone this July. 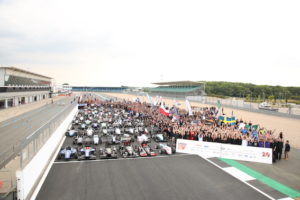 Formula Student challenges university teams from across the world to design and build a single seater car which they drive in a series of races over three days on the renowned Silverstone track.

This year will see the launch of Formula Student’s AI competition, where teams will programme the competition’s prototype autonomous vehicle as well purpose-built vehicles to undertake a series of on and off track driving challenges.

Andrew Deakin, chairman of Formula Student, said: “Around 1,000 university teams have been involved in our Formula Student competition in the 20 years since its launch, which equates to roughly 40,000 students from across the world. This year we are really excited to have teams competing in the new FS-AI competition. Formula Student has always been proud of the work it does to prepare students for the real world of industry and FS-AI will help us achieve that in the ever expanding area of autonomous vehicles.”

After facing fierce competition last year from the winner Australia’s Monash Motorsport, top ranked UK team Oxford Brookes University will be keen to clinch top spot and join Cardiff University in the Hall of Fame of British winners of the UK competition.

As one of the 59 British universities taking part, they will be joined by other long-standing and successful teams including Loughborough University, University of Sheffield and University of Glasgow who are also looking to better their 2018 results.

Additionally, a team from Hong Kong will take part in UK Formula Student for the first time. HKU Racing from the University of Hong Kong will travel to compete in the Class 2 event, a testament to the diversity of teams competing at Silverstone.

Lucy Killington, project manager of Formula Student, said: “Formula Student remains one of the highlights of the Institution’s calendar and it is so inspiring to watch the passion of young engineers applying their academic learning to real world projects.

“We look forward to welcoming all teams at Silverstone to take part in this year’s competition and wish them the best of luck.”