New research from Barclays Corporate Banking shows that only six per cent of Generation Z (16-23 year- olds) are considering a career in manufacturing. Almost half (47 per cent) state this is because the career path does not appeal to them, or they do not believe they have the skills required (35 per cent) for the role. 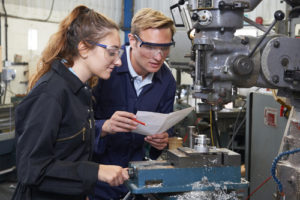 The new Barclays Corporate Banking Manufacturing report, A New Image for Manufacturing, surveyed 2,000 16-23 year olds to understand how perceptions of manufacturing have changed, and 500 manufacturing decision makers to reveal what businesses have been doing to recruit new employees, and upskill their existing workforce to use new technologies.

The challenge of attracting talent

Many manufactures recognise that there is a perception barrier to recruitment. Almost two-fifths (39 per cent) of the businesses surveyed admit that perceptions of careers in manufacturing have become worse over the past 20 years. In particular, the research reveals that industry is struggling to attract a diverse workforce, with just 3% of young women stating they would contemplate a career in manufacturing, compared to 9% of young men. According to the OECD, women in G20 countries account for only one in four university graduates in the STEM based subjects of science, technology, engineering and maths.

Helena Sans, Head of Manufacturing at Barclays, comments: “Transforming outdated perceptions of manufacturing isn’t an easy feat, as stereotypes are hard to break, but the potential gains that come with a re-invigorated workforce and a new wave of talent in the industry, offer a tangible return on this investment.

“Our research reveals that there is a mismatch between perceptions of manufacturing and the reality of what a career in manufacturing can provide. The skills most desired by young people include decision-making, complex problem-solving and technical skills but these match the skills that manufacturers say employees gain from working in the industry and highlights the need for businesses to engage and inspire the younger generation.

“Raising a generation from early years to graduation is a 20-year process. In order to have an impact by 2050, manufacturers need to find ways to educate and influence the next generation now or face another 20 years or so grappling against these skills challenges. One solution is to focus on appealing to women as well as men as it’s clear that there is currently a huge gender gap in perceptions of the manufacturing industry.”

Manufacturers have tried a variety of strategies to overcome recruitment challenges in the past five years, including launching apprenticeship schemes (28 per cent), forging partnerships with universities (19 per cent) and further education colleges (15 per cent) as well as marketing on social media (27 per cent). Through these partnerships and schemes, manufacturers can reach and influence the next generation of workers and promote the wider benefits of a career in manufacturing. The skills most in demand from young people include decision-making skills (38 per cent), social skills (38 per cent), resource management skills (35 per cent), complex problem-solving (34 per cent) and technical skills (32 per cent). From an industry perspective, a career in manufacturing is well-matched to the skills that young people want to attain. Connecting with young people on their preferred social media platforms can help raise awareness that a career in manufacturing will meet these future aspirations.

Manufacturers are facing a skill gap

Against this backdrop, over half of British manufacturers (52 per cent) are finding it difficult to recruit, not only among young people but also with experienced workers. Despite many businesses (35 per cent) receiving an overflow of applications, the candidates applying do not have the right skills for the job, with over a third (36 per cent) of manufacturers reporting that applicants lack knowledge in the STEM based subjects. The report also found that under a third (30 per cent) of businesses say their employees lack the correct technical skills for the trade (equipment maintenance/repair and quality control), followed by advanced technical skills (21 per cent) (the ability to maintain and manage 4IR technology).

Although, one in five of manufacturing businesses (21 per cent) say they are already seeing workforce morale dip and over a third (36 per cent) have noted a strain on their existing workforce due to a lack of new recruits, a quarter (25 per cent) of businesses do not plan to change their recruitment strategies or invest more in recruitment.

The added value in attracting the right talent

Economic modelling undertaken by Barclays for this report concludes that manufacturers could add an extra £6.1bn to the UK economy per annum by 2023 by investing more in recruitment drives such as apprenticeship programmes, graduate recruitment strategies and collaborations with Universities or other institutions.

However, only 11 per cent of firms surveyed have plans to promote the benefits of a career in manufacturing over the next five years. Employing these strategies could help tackle misconceptions about manufacturing and encourage the next generation to study the relevant subjects to plug recruitment gaps, resulting in both commercial benefits and a brighter future for manufacturing.