Nicomatic has announced that the WARR Hyperloop Team from the Technische Universität of Munich (TUM) has won the 2018 SpaceX Hyperloop Pod competition by going almost 50 per cent faster than in 2017, achieving a final speed of 467 km/h. Nicomatic is the team’s only connector sponsor and Nicomatic’s micro-connectors contributed to this success by delivering reliable performance under challenging race conditions, while minimizing space and weight. 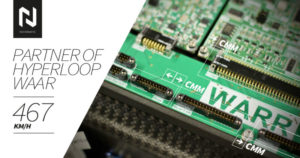 Hyperloop is a new transportation concept proposed by Elon Musk, founder of Tesla and SpaceX in 2013, in which a high speed train travels in a near-vacuum tube. The reduced air resistance in the tube allows the pod to reach speeds of more than 1000 km/h. To achieve maximum performance, every component in the pod must be smaller, lighter and more efficient, which is where Nicomatic’s CMM micro-connectors are extremely beneficial. Not only do they feature a compact, extremely light and high-performance construction, they also feature extremely high resistance to shock and vibration, so are able to guarantee signal integrity under the challenging conditions that Hyperloop pods experience. Nicomatic’s DLMM Series connectors featuring metallized insulator with 360° shielding function including backshells was also considered for this project.

Suited for both board-to-board (due to its secure wiping length), and board-to-wire (from AWG 24 to 30) applications, CMM connectors are available with any pin selection from 04 to 60 signal contacts. More, Nicomatic uses modular manufacturing technology, so all configurations are available on very quick turnaround. Cabled versions can be assembled at Nicomatic or by the customer.

Commented Sébastien Charbonnel, Head of Nicomatic GmbH: “This project is playing a part in changing the future of rail traffic, so Nicomatic is proud to sponsor the WARR team, which also won the competition in 2017. Extraordinary talents and futuristic projects such as the WARR Hyperloop pod are very synergistic with Nicomatic’s ambitious philosophy and company spirit, and we congratulate the team on its well-deserved success.”