This 2018-19 season, new mapping technology will capture fan energy during football games within the Allianz Arena. 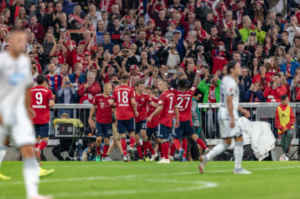 Never before has attention been turned to the fans and their performance. How does their performance compare to that of the team? What are the unsung moments that elicit the greatest reaction from them? And how can we bring the power and potential of data storytelling to a wider audience?

To find out, Siemens has teamed up with The Economist Group to convert the hidden story of fan energy at football matches into visuals using pioneering sound mapping technology.

During the 2018-19 season, acoustic camera technology will be used to capture sound data at FC Bayern home games at Allianz Arena. The data will then be mapped onto a 3D model and used to bring to life the story of the fans, and their emotions, through visual data and will also track the relationship between fan energy and its interplay with on-pitch performance.

Fan energy is determined throughout the game by calculating the average loudness of the stadium for each second and then “smoothing” these values by calculating a moving average with a window of 200 seconds. Using moving average allows us to remove some of the noise and uncover long-term trends of the crowds reacting to the game.

Siemens will host a custom content destination on The Economist platform housing analysis and commentary around the data visualization from each game, as well as other data-related content. You can find it here: https://reimaginethegame.economist.com/en/about