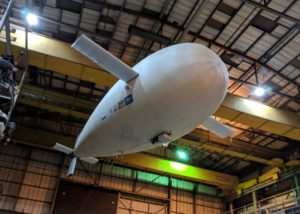 The autonomously-controlled Phoenix aircraft has undergone successful test flights and has the potential to take the lead in the world development of pseudo-satellites.

Pseudo-satellites are able to fly, remotely-controlled or autonomously,  at very high altitudes for long periods of time – often months. The can fly above commercial aircraft routes and above turbulence and moisture. They complement conventional satellites and can be used for earth-mapping, scientific observation and intelligence gathering.

The 15 metre-long Phoenix spends half its time as a heavier-than-air aeroplane and the other as a lighter-than-air helium balloon. The repeated transition between these two states provides its sole source of propulsion.

MTC engineers made extensive use of National Instruments’ hardware and software suites to build, program and test the aircraft’s control system including hardware-in-the-loop tests of its autonomous pilot system developed by Stirling Dynamics. The MTC has also provided testing facilities and expertise for hardware components including pumps and actuators provided by TCS Mircropumps. In addition support was provided to the flight trials including assembly, piloting and testing.

“The variable-buoyancy propulsion technology has been used before for remote controlled underwater vehicles but has never been used for the propulsion of a large aircraft. The power for moving the flight-control surfaces, the valves and pumps comes from a battery charged by an array of lightweight flexible solar cells,” he said.

He added, “The technology involved in this project is truly cutting-edge and has the potential to take the UK into the lead when it comes to this kind of innovation.”