An apprentice trained at the Advanced Manufacturing Training Centre in Coventry is to represent the UK at the international Skills Olympics competition in Russia. 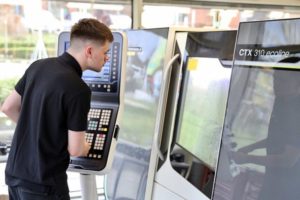 Jack McCarthy, who was one of the first cohort of apprentices to be trained at the AMTC – part of the Manufacturing Technology Centre – will compete at the WorldSkills competition in Kazan in August, having successfully competed in WorldSkills UK to win his place.

Jack, who is 20 and comes from Coventry began his apprenticeship at the AMTC in 2014, completing it last year. He now works for DMG Mori in Coventry. He will compete in Russia in the CNC turning category.

Apprentices from all over the world will battle it out to win gold, silver or bronze in their chosen skill. The UK is currently tenth in the WorldSkills rankings.

Paul Rowlett, managing director of the AMTC, said it was a great achievement for Jack.

“Representing your country on the world stage is no easy feat. It takes hard work, determination and a high level of skills. We are delighted with what Jack has achieved and wish him luck in Kazan in August,” he said.

Steve Finn, managing director at DMG Mori said, ” Jack is a fantastic example of how the cross-collaboration between different industrial partners – in this case the AMTC and DMG Mori – can produce exceptionally well-rounded engineers that will go on to shape the future of British manufacturing.”