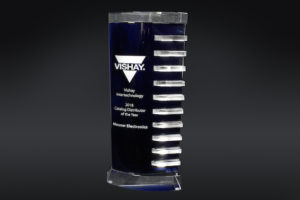 “We are pleased to present the Mouser Americas team with these top two awards for their outstanding sales performance in 2018,” said Dave Valetta, Executive Vice President of Sales at Vishay Intertechnology. “High service distribution is a central part of our business strategy and Mouser’s best-in-class performance and service sets them apart.”

“It is our honour to receive these top awards from our valued partner Vishay,” said Jeff Newell, Mouser Senior Vice President of Products. “Our customers across the globe depend on Vishay components for their designs. We look forward to many more years of continued business success together.”

Vishay manufactures a wide range of discrete semiconductors, including diodes, MOSFETs and infrared optoelectronics, in addition to passive electronic components such as resistors, inductors and capacitors. To learn more about Vishay products available at Mouser Electronics, visit www.mouser.com/vishay.

Previous New CEO on JonDeTech: “We are in a better position than ever before”
Next New partnership to utilise data from IoT sensors to help insurers more effectively price risk