Mouser Electronics has released a new eBook centered on industrial automation as part of All Things IoT, the latest series in Mouser’s award-winning Empowering Innovation Together programme. In the third and final eBook in the series, industry experts explore the innovative technologies and trends that cities are applying to emerging smart infrastructure projects. 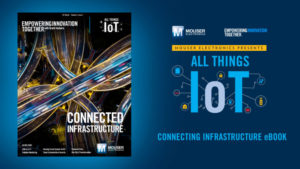 “So far in the All Things IoT series, we’ve seen how connected technologies are improving our lives at home and in the workplace,” said Kevin Hess, senior vice president, Marketing at Mouser Electronics. “In this new eBook, our experts investigate the sometimes-unnoticed parts of our world where IoT can make a major difference, such as lighting, traffic, and green energy.”

Mouser launched the All Things IoT series with a video that followed Imahara as he visited the Hewlett Packard Enterprise (HPE) IoT Innovation Lab to examine how IoT is impacting our workplaces and cities as a whole. Following the video, Mouser released All Things IoT eBooks focused on home automation and industrial automation.

Since 2015, Mouser’s Empowering Innovation Together programme has been one of the most visible and recognized programs in the electronic component industry, featuring topics such as the future of human-machine interaction in Generation Robot and the amazing benefits of technologies that are Shaping Smarter Cities.