Molex has announced the winners of its 2018 European Distribution Awards at their 2019 Distribution event. Held in Windsor, UK on 24 April, Molex’s senior management team were joined by representatives from across the distribution network for a day of presentations from Molex’s business units and divisions, as well as a Gala dinner to close the evening. 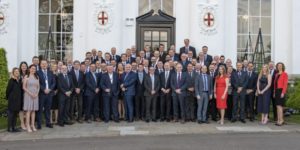 Molex’s awards ceremony comprised of nine awards, acknowledging the role of its distributors throughout the region. “The awards are designed to recognise the continued efforts of our distributors”, explains Paul Keenan, Sales Director – Distribution Europe, Molex “and reward the contributions made towards advancing the Molex business through demonstrated growth in sales, along with financial, operational, and executive management excellence.”

Award winners were evaluated and selected based on criteria across multiple categories. The winners demonstrated growth in year-over-year sales, project conversion and engagement. Avnet Abacus were named the 2018 European Distributor of the Year for an impressive third year running. A leading distributor of interconnect, passive, electromechanical and power components, Avnet Abacus were also awarded the regional 2018 Distributor of the Year awards for Northern Europe and France, BV & South Africa.

2018 also marked the first European eCatalogue Distributor of the Year award, which was presented to Mouser Electronics. Burisch Elektronik Bauteile were named 2018 European Single Country Franchise Distributor of the Year. Matt Robinson, Supplier Account Manager EMEA, from Farnell element 14 was recognised with an award for his contributions in 2018.