EDGE4x4, a team of four 15 and 16 year-olds from Worcester, are busy preparing to represent the UK in the World Finals of the Land Rover 4×4 Technology in Schools Challenge in April – www.4x4inschools.com 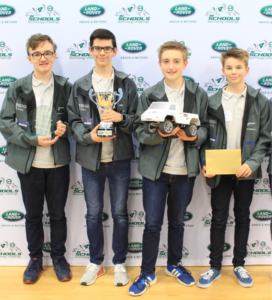 The challenge is to design and build a 1/10th scale radio-controlled, four-wheel drive vehicle according to detailed specifications of size, weight, and approach angles, with an array of sensors. The vehicles compete upon demanding off-road courses, overcoming extreme obstacles like rope bridges, steep slopes and narrow tracks which are designed by Land Rover to simulate full-scale testing.

The challenge teaches young engineers many skills and tests their literacy, presentation, marketing, engineering and design skills by requiring them to produce not just the car, but also a 20-page portfolio, a ten-minute presentation and an exhibition stand. Additionally, they are judged on how they present themselves to the media and undertake special challenges on the day, like software coding and extra vehicle tests. 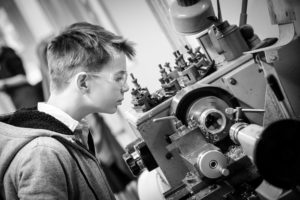 Ed Cosson, Toby Weymouth, Alfie Parry and Ed Robins, all from The King’s School in Worcester, are looking forward to the five-day World Final at Warwick University just before Easter. This will be the final outing for EDGE4x4, when they will compete against teams from nine other countries including Australia, Singapore and the Czech Republic, at the end of what has been an incredibly successful and rewarding two years.

Being teenagers, the boys originally entered the competition as novices in the ‘Development Class’, full of enthusiasm, thinking nothing of the fact they were much younger than most other competitors. Fortunately, their enthusiasm was matched by a very determined work ethic, so they spent many late afternoons and weekends in the school workshops developing their car. Inspired by the, then new Jaguar F-Pace, the team and car progressed through to the UK finals at the Silverstone Grand Prix circuit, where they were placed first in the ‘Development Class’. 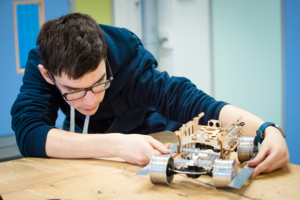 The team’s second year was a lot more demanding because having won in the novice class, the team had to enter the more demanding ‘Professional Class’, where despite only being 14 and 15 year-olds themselves, they had to compete with teams aged 18 or 19 years old.

Being a year older, the boy’s enthusiasm was tempered by reality and they realised that they could not give a presentation, or write as good a project portfolio as team’s three years older than them. However, being incredibly determined and ambitious, they decided to try and excel in their engineering, manufacturing, marketing, the driving of the car on the course, not to mention working extremely hard – In fact over the past two years, the boys have spent several hundred hours working on their car and challenge.

Taking a somewhat unusual vehicle for inspiration, the boys chose to produce a modern interpretation of Land Rover’s Forward Control vehicles from the 1970s. They were helped in this by the British Motor Museum in Gaydon who had a Forward Control vehicle for them to study and allowed them to run fundraising events. Therefore, it seemed appropriate when the team reached the UK finals which were held over two days at the British Motor Museum.

The team used a combination of the latest manufacturing and design technologies such as laser cutting, 3D printing, CAD design as well as old-fashioned skills like cutting, metal-bending, tapping, threading, filing and mould-making. For example, the team laser-cut the chassis, built their own gearbox out of aluminium, and vacuum formed a highly detailed body.

The team have also produced marketing videos and videos of crash testing and development stages which can be seen on their website www.EDGE4x4.co.uk

Having won the Midlands heat the team progressed to the UK finals which they won and were given the opportunity to represent the UK at the World Finals this April. With less than a month to go, the team are working on another development of their car, a new body design, their portfolio and much more. A side-effect of them being much younger than their competitors is that they are also about to take their GCSE examinations, so these last few weeks are very hectic. 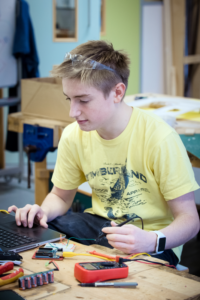 Whilst the boys have achieved a lot, it would not have been possible without the support of their teacher, who had to teach them the engineering skills they needed, years in advance of them being taught during their GCSE in Design and Technology.

The design, development, research, manufacturing and marketing at such a high level over the past two years has also cost a lot of money and so the team’s success is also due to support from many companies including Worcestershire based sponsors drp Group, Gtech, Mazak, Plus Automation and Gtech; international companies BFGoodrich, Brit Part, EnerSys, Overfinch and RS Components; and events including the Chateau Impney Hill Climb, the Land Rover Owners Show, and the British Motor Museum.

To follow the team’s progress, or to discuss supporting them please visit www.EDGE4x4.co.uk. They also have a fundraising page at www.tiny.cc/Edge4x4