The Alan Turing Institute and the British Library, together with researchers from a range of universities, have been awarded £9.2 million from the UKRI’s Strategic Priorities Fund for a major new project. ‘Living with Machines’, which will take place over five years, is set to be one of the biggest and most ambitious humanities and science research initiatives ever to launch in the UK. 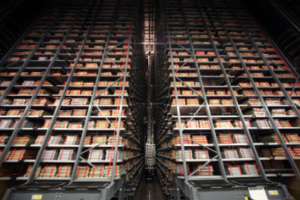 A new kind of scholarship

‘Living with Machines’ will see data scientists working with curators, historians, geographers and computational linguists with the goal to devise new methods in data science and artificial intelligence that can be applied to historical resources, producing tools and software to analyse digitised collections at scale for the first time.

In recognition of the significant changes currently underway in technology, notably in artificial intelligence, the project will use the century following the first Industrial Revolution, and the changes brought about by the advance of technology across all aspects of society during this period as its focus point.

Initial research plans involve scientists from The Alan Turing Institute collaborating with curators and researchers to build new software to analyse data drawn initially from millions of pages of out-of-copyright newspaper collections from within the archive in the British Library’s National Newspaper Building, and from other digitised historical collections, most notably government collected data, such as the census and registration of births, marriages and deaths. The resulting new research methods will allow computational linguists and historians to track societal and cultural change in new ways during this transformative period in British history. Crucially, these new research methods will place the lives of ordinary people centre-stage, rather than privileging the perspectives of decision-makers and public commentators.

‘Living with Machines’ will take a radical approach to collaboration, breaking down barriers between academic traditions, bringing together data scientists and software engineers from The Alan Turing Institute and curators from the British Library as well as computational linguists, digital humanities scholars and historians from universities including Exeter, University of East Anglia, Cambridge and Queen Mary University of London.

The research methodologies and tools developed as a result of the project will transform how researchers can access and understand digitised historic collections in the future.

The insights from the project will provide vital context for the present-day debates about the future of work, prompted by the social change caused by the so-called ‘fourth industrial revolution’ of artificial intelligence and robotics.  For example, data-driven findings relating to how attitudes to machines and mechanisation changed during the nineteenth century could help present-day researchers and policy-makers to understand and unpick public understanding around current attitudes towards new technologies, for example autonomous vehicles or the use of artificial intelligence and robotics in everyday transactions.

Key starting points for the project include marshalling data, developing workflows and methods for ensuring data quality developing intuitive interfaces to facilitate collaboration with historians, and the launch of the collaborative research agenda through project ‘laboratories’. There will be future calls and opportunities for researchers to get involved.

Professor Roey Sweet, director of Partnerships and Engagement at the Arts and Humanities Research Council, commented: “Living with Machines represents a hugely exciting and innovative development in arts and humanities research. The collaboration between historians and data scientists, exploiting the remarkable growth of digital archives, will open up dramatic new perspectives on the well-known story of the industrial revolution and the history of society’s relationship with machines and technology since the eighteenth century.”

Adrian Smith, director of The Alan Turing Institute, commented: “Data science and artificial intelligence have the potential to supercharge the science and humanities. We can analyse vast amounts of data at a huge scale and uncover new insights and questions, as in this timely project with the British Library which will apply data-driven techniques to examine the human, social and cultural impact of the first industrial revolution. It is thrilling to bring together this diverse range of experts to work on this important research problem and deliver tools and techniques which will benefit scholars for generations to come.”

Dr Ruth Ahnert, senior lecturer in Renaissance Studies at Queen Mary University of London and lead researcher on the project, commented: “For me this is more than just a research project. It is also a bold proposal for a new research paradigm. That paradigm is defined by radical collaboration that seeks to close the gap between computational sciences and the arts and humanities by creating a space of shared understanding, practices, and norms of publication and communication. We want to create both a data-driven approach to our cultural past, and a human-focused approach to data science.”