Titan Enterprises recently supplied a set of aerospace flow meters with associated electronics to a leading aerospace company. The objective was to meter the oil consumption of a jet engine to an accuracy, better than ±0.5 per cent. The jet engine flow meters were calibrated using the actual fluid used in the engine, and referenced oil manufacturer’s density charts in order to apply corrections for temperature changes. A calibrated platinum resistance sensor was incorporated into the jet engine flow meter’s body to ensure accurate temperature measurement. 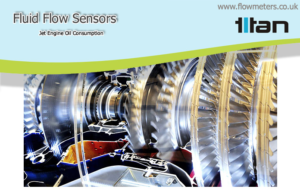 During testing of the jet engine flow meters and flow monitoring jet engine oil consumption, the customer weighed the oil at the start of the run, ran the engine for a pre-determined period and weighed the remaining oil to see how much the engine had consumed. After the initial test the customer reported that the supplied aerospace fluid flow meters were over 0.5 per cent out from their mass tests. They returned the jet engine flow meters to the factory and Titan re-calibrated and attained virtually identical results to its first run. Doubting its own flow calibration rigs Titan did a mass calibration on its flow rigs but this appeared to confirm that everything was calibrated correctly.

Titan could see no problems with the techniques used but could not explain the offset in the answer which was repeatable but wrong. As a consequence Titan decided to check the density correction matrix it had entered into the system in case it had made a repeated error. Handed a copy by the aerospace company of their own density correction chart titan noted it was 0.5 per cent offset from the oil manufacturer’s data. Entering the customer’s empirically collated data Titan’s fluid flow sensor performed perfectly.

Previous RS Components achieves Phoenix Contact award for their outstanding performance in 2018
Next Brexit: How to lead and help your team thrive in uncertain times