This year the UK has seen brushfires rage across large areas of heath and moorland, a problem that may become increasingly common as climate change drives global warming. New techniques and increased levels of expertise will be needed to combat these. Here we look at the potential of some emerging technologies. 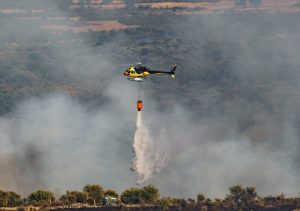 British helicopter pilots are beginning to wonder if, like their American and Australian colleagues, they will be called upon regularly each summer to act as firefighters, flying sustained water drop missions to put out fires and damp down tinder-dry swathes of open land or forestry.

Such duties have been commonplace in other parts of the world for many years. However for the most part they have been reactive missions once the fire has really got established and emergency call-outs have been implemented.

In such cases brave and skilled pilots have to overfly a lake or the sea and lower in a bucket scoop, allow it to fill then climb, carefully absorbing the weight of thousands of gallons of water, and fly to the fire before dropping the water on the danger area – repeating this difficult flight profile many times over.

Originally, and most-often still today, the water is dropped in a largely unguided manner, hoping that it will find a target and have a significant effect. Pilots have only a limited field of downward view, so can really only work by guesswork. However crew members may have a better view and be able to guide the pilot if they lean out of a window or side door, use a periscope or a downward pointing camera.

Ground personnel in radio contact with the pilot may be able to direct the aircraft into position. But they will not be that close to the fire, may not be able to determine the hot spots and will have difficulty gauging the speed of approach (particularly if the helicopter is approaching at an oblique angle).

In recent years some helicopter pilots have been using a piece of equipment called the HeliNav TrackMaster for precision-flying missions such as crop spraying, tree harvesting and upland conservation work. This was developed by a UK company, Sensor Technology in Banbury, which originally worked in the industrial sectors but then realised some of its products were also ideal for aerial use.

Basically, HeliNav TrackMaster uses GPS signals to identify the exact position of its host helicopter over an area of land to within an accuracy of 2-3 metres. This means, for instance that crop fields can be sprayed evenly, even after the aircraft has had to fly away to reload more spray then return to site. It also allows individual trees to be pinpointed within a forest. In conservation work TrackMaster makes it possible to fly heavy flagstones and lower them straight into position to create mountain paths, etc.

Clearly this technology could also be used to help dampen down a whole heath or moor, or to drench a burning area. Significantly it can be used to ensure that the entire site is covered and no spot is wetted multiple times while other parts are left untreated. This would represent an efficiency saving for the actual helicopter flight path, while – perhaps more importantly – also allowing the ground personnel and fire crews to be confident that the whole fire risk area has been addressed.

This technique could be enhanced by integrating it with thermography. If the helicopter was fitted with a thermal imaging camera, a heat map of the area could be generated and used to direct water dumps onto the hottest areas. Another technique could involve the use of a thermal camera mounted on a separate drone which could fly independently of the helicopter, being both cheaper and enabling the option for pre-emptive mapping as the ground warmed up but before fires break out.

Further enhancements could be made using another Sensor Technology innovation, namely HeliNav LoadMaster, an intelligent cargo hook for underslung loads. This patented device transmits load data signals wirelessly to the cockpit and/or to a ground station, so there is no need to drill a hole for a signal wire in the aircraft body (which would mean the Civil Aviation Authority requiring recertification for airworthiness).

Using HeliNav LoadMaster would mean lifting a filled bucket out of the lake or sea would become safer, as would the sudden reduction in load when the water is dropped onto a hotspot. Used in conjunction with TrackMaster, full and accurate data would be available for the amount of water lifted, the area soaked and the miles flown, enabling accurate billing, optimised use of flying assets and better mapping for fire control.