The Three Counties Defence and Security Expo (3CDSE) has announced its headline sponsor for this year’s event. 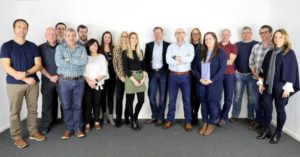 3CDSE – which will take place on Tuesday 16 July and Wednesday 17 July 2019 at The Three Counties Showground in Malvern, Worcestershire – has confirmed Level Peaks Associates as its top sponsor.

LPA supplies state of the art tactical capability systems from polymer rifle magazines and fully integrated combat clothing systems to unmanned air systems and advanced rocket systems to the MoD, police forces up and down the country plus a host of NATO military forces.

Mark Smith, managing director from Level Peaks Associates explained : “After having successfully exhibited at 3CDSE last year, we decided that it really is the industry’s ‘go to’ event.  It provides us with an unrivalled opportunity to showcase our capabilities, meet with current and potential customers, network with relevant businesses and gain a better understanding of the marketplace.

“As we continue to grow, sponsorship of such a prestigious event will raise awareness of our brand and we are delighted to be involved in such a way.”

Importantly, this year’s event will coincide with an MoD Industry Day, the first time this has happened in its three year history.

Previous shows welcomed more than 100 exhibitors and 1000 delegates from a wide range of backgrounds and sectors including those working in Command, Control, Communications, and Computers Information Systems (C4IS), Unmanned Aerial Vehicles (UAVs) and Cyber Security.

The Industry Day will share the vision and work of The Special Projects Programme Delivery Group which is responsible for the procurement and support of a wide range of equipment used primarily by specialist users.  It will also include presentations from each of the teams’ specialist portfolios and allow for smaller breakout sessions to facilitate more detailed discussions with MoD staff.

A special 3CDSE Networking & Innovation Dinner will take place on Tuesday 16 July at Eastnor Castle in Ledbury, providing an excellent opportunity for sponsors to raise their profile with more intimate groups of key decision makers from the military, law enforcement, security agencies and industry.

Richard Morgan, partner and head of Defence, Security and the Forces Team at Top 100 UK law firm Harrison Clark Rickerbys, and lead for 3CDSE said: “We are delighted to welcome on board Level Peaks Associates as our major sponsor.  The event is truly diverse in representing the spectrum of technologies, manufacturers, consultancies and software developers with both products and services actively encouraged to ‘do the talking’ to a unique audience of users and procurement agencies with transparent objectives for 2019 and beyond.”

3CDSE has established itself as an event that promotes business-to-business networking with key decision-makers and shares and amplifies innovative thinking and ideas within the industry.

Other sponsors of the event include Thales, KnowledgePool, Kinetic 6, Wilcox, C2R Fast and Arnold Defence.

The event comes at a critical time as the MoD has confirmed that – as part of diversifying its supply base by 2020 – it plans to spend two per cent of the UK’s defence budget on SMEs.  This is encouraging news as 90 per cent of the defence industry is based in The Three Counties of Herefordshire, Worcestershire and Gloucestershire; the event is therefore perfectly placed for them to showcase their products and services and, ultimately, obtain government contracts.

The event will be split between the Industry Day on Tuesday 16 July and the exhibition and conference on Wednesday 17 July; following on from the success of previous years, there will be an expanded exhibition area – holding up to 150 exhibitors – offering excellent networking for SMEs.  There will also be extra external space where vehicles, hardware and demonstrations can be visited.  Wednesday will also see the introduction of MoD Connection Zones where companies and individuals will be given the chance to meet MoD officials, fostering conversation and networking.

A new feature for 3CDSE 2019 will see The ADS Group – Aerospace, Defence, Security and Space – running a series of free to attend introductory masterclasses on understanding and accessing the security and resilience market.

Tickets for the Industry Day – security clearance is required – can be purchased via the website at 3cdse.co.uk.  Entry to the conference and exhibition is free and aimed at senior members of the military, law enforcement agencies, government agencies and defence and security industry.