HARTING’s mating-face design for Single Pair Ethernet (SPE) connector technology has been selected by international standards committees as the standard for the next generation of industrial Ethernet connectors. 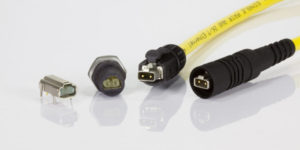 HARTING is driving forward the development of the standardisation of the new Single Pair Ethernet (SPE) technology. Now, following a multi-stage selection process, international standardisation committees have decided in favour of the HARTING Technology Group’s SPE mating face. “We are very pleased with this decision,” commented Ralf Klein, managing director of HARTING Electronics, “which also ensures planning security for the developers of new devices for sensor/actuator technology.”

Single Pair Ethernet is a new Ethernet technology that requires only one pair of wires (instead of four pairs) to transfer data and power. This technology, which was originally driven by the automotive industry, is now gaining increasing importance in automation technology, where its development is advancing rapidly. Thanks to its simplicity and an associated reduction in weight, space requirements and installation effort, it promises to have an exciting future within the industrial sector: especially in automation technology and the rail industry.

Thanks to SPE, it is now possible to implement digitisation down to the field level, resulting in end-to-end IP-based communication. Equipping simple sensors, cameras, readers and identification devices with Ethernet interfaces supports the implementation of Integrated Industry and the Industrial Internet of Things.

The end-to-end compatibility of devices, cables and connectors is a prerequisite for the widespread use and successful marketing of SPE technology, which is supported by international standardisation activities through organisations like the ISO/IEC and the IEEE. Since the beginning of 2018, an internationally based selection process for the cabling and standard SPE mating faces has been under way involving the ISO/IEC and more than 20 national expert committees. As a result of this process, two mating faces have prevailed, although there is still some work to do before the final decisions are made:

·      For building wiring, the mating face is based on a proposal from CommScope using the IEC 63171-1 standard.

·      For industrial and industry-related applications, the mating face is based on the HARTING proposal according to IEC 61076-3-125.

Based on this mating face, HARTING is now preparing a comprehensive product portfolio for the industrial sector, which will take at least 12 months of development. The technology has been driven forward in the past two years in close co-operation with customers. Nicomatic has expanded its UK team with the addition of highly-experienced custom connector specialist, Quentin … Powell Electronics, the supplier of connectors and more for high-rel applications including defence, aerospace and …