FUTEK Advanced Sensor Technology has congratulated the NASA/JPL team on their extraordinary success in managing the Mars Exploration Rovers Opportunity and Spirit since their initial Mars landing in January 2004. 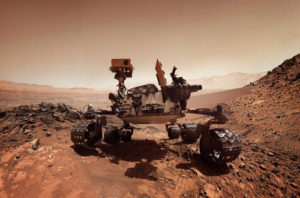 While FUTEK was not a part of these early Rovers, the company appreciates the extraordinary efforts of the JPL team to keep these Rovers operating as viable exploration laboratories far beyond their designed mission time.  These twin rovers that landed on different locations on Mars in 2004 have logged over 28 miles on the Martian surface and exceeded their design three-month expected lifetime by 15 years.  The Spirit rover functioned until it fell into a sand trap on the back nine and lost communication in 2000.  The Opportunity rover uncovered scientific evidence about ancient conditions on Mars that could have supported life as well as other scientific discoveries until a planet-wide sandstorm in June 2018 deprived it of the solar energy is needed to charge its batteries and continue its mission.  The mission was declared closed this week when all efforts to reestablish communication were ended.

FUTEK Advanced Sensor Technology’s sensors continues to be a vital part of the Mars Exploration Rover Curiosity which continues explore the surface of Mars and send back extraordinary science from the surface of Mars.  The Curiosity rover is five years into its mission and continues to outperform NASA’s original expectations.  The two FUTEK sensors on the Curiosity rover have played an even more vital role than their original mission anticipated.  When the rover’s original drill mechanism failed the JPL team found a way to configure the two FUTEK sensors to stabilize and control the drilling so the sample collection and analysis could resume.

While FUTEK sensors are primarily known in the MedTech industry for their integrated support of robotic surgery platforms and medical tools & appliances, FUTEK’s highly sophisticated and cryogenic sensors have played essential roles in space exploration even beyond the Mars Rover Curiosity in such endeavors as the International Space Station and in various satellite programs.