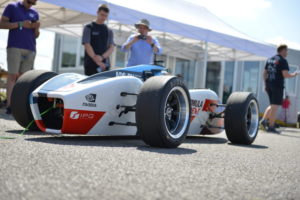 Six UK universities are entering autonomous cars in Formula Student, which is run by the Institution of Mechanical Engineers and gives participants the opportunity to build, design and race cars using their creativity and technical expertise to apply the latest technology.

Teams competing in Formula Student Artificial Intelligence include universities which have a long track record in the traditional event.

“This summer’s launch of the Formula Student AI competition is very exciting and we look forward to seeing the cars on the track,” said Dr Colin Brown, CEO of the Institution.

“The AI event leads the way in supporting the UK automotive industry, where there is growing demand for electronics and software skills to support connected and autonomous vehicle manufacturers and their supply chain.”

The prototype has lowered the barrier to entry for teams who do not have the resources to design and build a running vehicle but have software, mechatronics and automation engineers ready to concentrate on creating control algorithms.

Teams had the chance to see the prototype car last year when it was unveiled at the competition’s 20th anniversary by Formula Student Patron Ross Brawn, OBE, FIMechE.

It was created by using funding from the Centre for Connected & Autonomous Vehicles via Innovate UK, who share the Institution’s aim of supporting the UK connected and autonomous industry by promoting skills development.

The IMechE are also grateful for the support of Hypermotive Ltd, DJ Racecars and Horiba MIRA in the development of the ADS-DV platform and FS-AI competition.

This year over 130 teams will line up on the Formula Student grid, with more than 3000 participants from over 25 countries taking part in the competition.