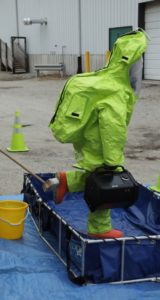 The Other Transaction Authority Agreement (OTA) is valued at $28.7 million, with execution extending through mid-2022. A modified version of the FLIR Griffin G510 will form the basis of FLIR’s MPCAD solution.

The Griffin G510 is a portable gas chromatograph mass spectrometer (GC-MS) system currently used by domestic and international response teams to perform real-time chemical threat confirmation in the field. This development will provide the ability to identify chemicals at low levels in aerosol, gas, liquid, and solid phases of matter. It will provide the warfighter with field confirmation capabilities and better enable the Joint Forces to combat and interdict chemical weapons of mass destruction (WMD).

“We are proud to be selected as part of the US Military’s critical next generation chemical sensing program,” said James Cannon, chief executive officer at FLIR. “This award enables our team to further fulfill its mission to protect the lives and livelihoods of our Soldiers, Sailors, Airmen and Marines against the threat of chemical attack.” Work under the contract is expected to be performed at FLIR’s facility in West Lafayette, Indiana, US.