Engineering “inside the box”!

The official unveiling of an ‘Ingenuity Studio’ inside a repurposed shipping container outside Hereford’s Shirehall attracted representatives from schools, colleges and the community, intrigued to find out more about its role in engaging people with Hereford’s pioneering future engineering university, New Model in Technology and Engineering (NMiTE). 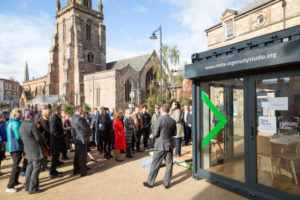 Launching Ingenuity Studio, Professor Elena Rodriguez-Falcon, Provost and newly appointed Chief Executive for NMiTE, said: “Our converted shipping container, Studio 1, is a place where people can think outside the box, inside the box!”

Cllr Jonathan Lester, Leader of Herefordshire Council attended and addressed the launch and then was shown around Studio 1 by some of NMiTE’s young co-creators, members of its Design Cohort.

The repurposed container is the first manifestation of NMiTE’s exciting new engagement programme, Ingenuity Studio. It will tour the region, within a 40-mile radius of Hereford, visiting schools, colleges, sports centres and arts centres as well as key events like Hay Festival and the Three Counties Show.

The Ingenuity Studio initiative is wholly supported by the Garfield Weston Foundation and its purpose is to engage people with NMiTE and with engineering.

“It’s a space which reflects our mission, our learning spaces and our new approach to learning. Most of all it’s a space where we want young people to understand what being an engineer can be,” said Professor Rodriguez-Falcon.

“We all experience something in our daily life that could do with modifying, improving, redesigning, reengineering. We want young people to feel engaged with the world around them, to be able to identify how improvements can be made, to harness technology to make things better. And we want them to brainstorm, to collaborate in teams, to design together.”

Guests at the launch were invited to explore Studio 1, which is equipped with all sorts of kit to support idea generation, including high-tech 3D scanners, 3D printers, laser cutters and digital routers.  They were shown around by the 25 members of NMiTE’s Design Cohort, a group of student-age co-creators who are helping to develop the future university.

Find out more about NMiTE’s Ingenuity Studio programme at www.nmite-ingenuitystudio.org