Buying British to reduce the balance of payments deficit has long been an ambition of parties of every political stripe. There is a fundamental belief that if we all just bought a few more products bearing the national flag we could turn the economy around. Jeff Kiernan, commercial director at Dawson Shanahan investigates how reshoring UK manufacturing could facilitate this growth. 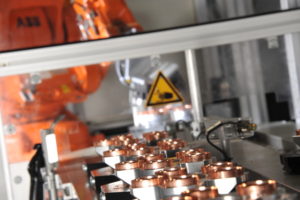 With the UK facing a crippling economic meltdown in the late 1960s, a government-endorsed campaign was launched in a bid to haul the struggling country out of its financial malaise. As a result, Britain was flooded with hastily made ‘I’m Backing Britain’ badges, mugs, car stickers and T-shirts (most of which, ironically, were made in Portugal).

Paul McCartney believed the ‘I’m Backing Britain’ campaign of 1968 – which aimed to turbocharge the British economy – was so ludicrous that it partly inspired him to write a song called ‘I’m Backing the UK’. This eventually became ‘Back in the USSR’ which featured on The Beatles’ White Album.

Although it was an abject failure, the ‘I’m Backing Britain’ campaign did spawn a host of similar, but less ineffectual, initiatives over subsequent years aimed at encouraging people to support UK manufacturing and buy British – Make it British, Great British Marketing, Make it in Great Britain, Made in Britain… the list goes on.

This patriotic fervour is perfectly understandable. The great British public is ambitious for our manufacturing sector, with 70 per cent of UK adults saying Britain should aim to be a top-five manufacturing nation, according to leading manufacturing and engineering organisation the EEF.

And there are many other compelling reasons why it pays to manufacture in the UK. Domestic production decreases the supply chain risk, reduces transport costs, cuts delivery times, boosts control over quality, improves control over communication, offers access to a large pool of skilled labour, provides environmental benefits and increases responsiveness.

Manufacturing makes up around 10 per cent of our economy’s output, and employs 2.6 million people in the UK, with many more in various supply chains. The sector is also responsible for a whopping 44 per cent of all UK exports.

So manufacturing is, arguably, the beating heart of the UK economy. Says the EEF: “While it is true [that the numbers] have declined since the sector’s heyday in the 1970s, and that the financial services sector has taken off over the last 30 years, the UK remains a key global manufacturing player – ranking in the top 10 in the world in terms of output.”

Indeed, Britain’s manufacturers began 2018 in the same upbeat manner they left last year, on the back of the continued improvement in global demand together with a pick-up in the UK market.

The EEF confirms: “Along with its impressive evolution, the manufacturing sector also has strong fundamentals. We have some world-leading universities, high class infrastructure, important trade links (for the time being…) and good support systems.

“This is helping to contribute to a dynamic, modern industry; the belief held by many that manufacturing is synonymous with dirty, low skilled, low paid jobs couldn’t be further from the truth.

“Manufacturing is one of the most productive sectors in the UK economy, outstripping productivity growth of the much flaunted services sector, as well as the economy as a whole. Furthermore, the sector attracts a colossal 70 per cent of business research and development, and 13 per cent of all business investment.”

Brian Monteith, director of communications at Global Britain and a former member of the Scottish parliament, said in April this year: “Reshoring of business back to the UK is the reverse of what the great scaremongers of the Treasury, Bank of England, IMF, OECD, and CBI were all warning of back in the summer of 2016 [following the controversial Brexit vote].

“Consider this little list: Clarks shoes has started manufacturing some of its boots in Somerset again, Vodaphone is reshoring call centre jobs back here, McLaren is creating hundreds of jobs for its chassis production in Sheffield, Gtech is bringing vacuum cleaner production back to the UK, and Frog is re-shoring its bike production on British soil.”

Adding to the positive news, Warwick Manufacturing Group recently surveyed more than 250 UK-based manufacturers to build up a picture of activities since 2008. It found a recent trend towards reshoring – both direct (when a company transfers manufacturing back to the UK) and indirect (a strategic decision to expand operations in the UK rather than abroad).

After all, most manufacturers in the UK compete primarily on quality rather than cost so the importance of retaining control over their output and offering a more responsive and integrated customer service means that many view production and a near-shore or onshore supply base as key sources of competitive advantage.

Bringing jobs back to the UK is not without its complications. These, identified by manufacturing body the EEF, include:

Previous Ricocheting radio waves monitor the tiniest movements in a room
Next 5G is coming: What to expect and why