High-tech production plants that “think for themselves”, that plan things automatically and that optimise maintenance work through artificial intelligence, might sound like a futuristic sci-fi film, but it is fast becoming a reality at Rittal’s manufacturing plant in Rittershausen, Germany. 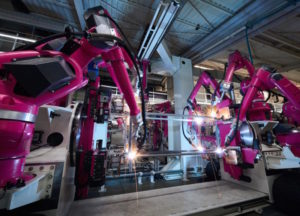 To produce its new VX25 large enclosure system, Rittal is transforming its production plant “on the fly” into a highly-advanced enclosures factory, populated by welding and handling robots. Half the conversion work has already been completed and the Industry 4.0 manufacturing unit is expected to be finished by 2020. The total investment involved has reached Euro120 million.

“In eighteen months’ time, nothing will look as it does now,” explains Carsten Röttchen, managing director International Production at Rittal.

The reason is the new VX25 large enclosure system, which is replacing the TS 8 – an enclosure which had long enjoyed worldwide success.  Even so, the VX25 is a far superior enclosure.  It was developed following countless discussions with customers, plus a large-scale scientific user study in Germany, the USA and China, as well as five years’ of development work.

In the process, the VX25 has been refined into a far simpler product, offering its users significant time savings. It is also extremely stable; it accommodates the tightly packed control and switchgear that governs the production of cars or heavy-duty energy storage units for wind turbines.

“Along with all our innovations and new product launches, we are modernising our production facilities as well,” says Röttchen.

These facilities are now being installed, step-by-step, in a conversion and transformation process which is now becoming apparent.

What is happening in Rittershausen is the start of a fully networked factory– something also known as “Industry 4.0” (IoT) production.

It is a project that has got a lot to offer.

“Much of this automation is based on intelligent and networked systems that think ahead, plan automatically and trigger maintenance scenarios,” explains Norbert Peter, plant director at Rittershausen.

He added: “This way, we can avoid any manual errors and, at the same time, speed things up even more.”

In its ultimate configuration, the new enclosure will ‘grow’ on several profiling systems, each 70 metres long. These profiles form the “skeleton” of the new system and they contain a huge amount of Rittal expertise.

Of the 70 new welding and handling robots, 30 have been moved into the production buildings and are already in operation.   The machines to communicate with each other via hundreds of sensors which monitor the fully automatic production processes.

Across the world, this system of networking is the logical answer to the high demands made on both production and logistics.

Customer expectations are increasing, particularly around the requirement for their deliveries to be fast and on time and it won’t be long before Rittal is offering a 24-hour delivery service throughout Europe.

To this end, each production step must be part of the highly complex value chain.

“Our vision is that if a customer in Italy orders ten VX25s, our production management system here in Rittershausen will be informed automatically and it will trigger production,” Röttchen explains.

Credit for a lot of this change must lie with Rittal’s employees who are underpinning much of the work, and helping to drive it forward.  They are having to make the necessary alterations at the factory to make it happen, such altering roof segments, or creating spaces for new machinery, or replacing floors that have been supporting machinery for 20 years.  They are also being very flexible, for example by working extra shifts at weekends.

Both Mr. Röttchen and Mr. Peter are aware of just how committed their employees are and that this commitment is not something to be taken for granted.  “This conversion work is not a sprint for individual runners, but a marathon being run by a team. The staff play their part with conviction, something which earns them a lot of respect,” says Röttchen.

Staff are being offered training on the new systems at the in-house Loh Academy. The courses are currently booked out weeks in advance, with more than 250 registrations to date.

“Everyone who wants to extend their training with us is given ideal opportunities to do so.  I am proud of our expertise here in Dietzhöltztal.  It’s a world-beater,” says Norbert Peter.