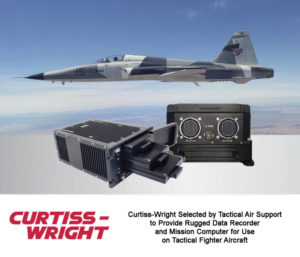 Under the contract, Curtiss-Wright will provide Tactical Air with its Commercial Off-the-Shelf (COTS) Parvus DuraCOR 8042 processor and Data Transport System 3-slot (DTS3) Network Attached Storage (NAS) file server. The DTS3 file server supports FIPS 140-2 hardware encrypted solid-state storage of mission data. It communicates seamlessly via Ethernet to a modified version of Curtiss-Wright’s DuraCOR 80-42 modular mission computer subsystem. The contract, which is valued at more than $1 million, is scheduled to run through the second quarter of 2019.

“We are very pleased that Tactical Air Support has selected our rugged mission computer and data recorder solutions for use in its F-5AT fighter aircraft fleet,” said Lynn Bamford, Senior Vice President and General Manager, Defense Solutions division. “We are especially proud, as this is the first selection of the DTS3 recorder for use on a fixed wing supersonic tactical fighter, and strengthens our position as a trusted and proven supplier of rugged high performance COTS electronics solutions.”