Bowers Group has become an official Metrology sponsor of the University of Wolverhampton Racing Team (UWR). 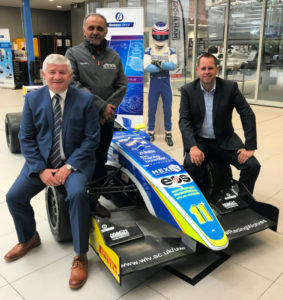 As part of the University of Wolverhampton, UWR is the only racing team to compete in the F3 Cup and the AR Morgan Challenge that uses students to design, manufacture, and race in a competitive environment. As a result, students gain valuable engineering industry experience working as a professional team in competitive motorsport.

As part of the University’s commitment to produce graduates who can apply both theory and practice in industry, the Undergraduate Degrees offered by the University of Wolverhampton are a unique opportunity to both study, and put the theory into practice in a fast paced racing environment. Students are encouraged to put their skills and stamina to the test in order to engineer cars that can race the fastest laps and compete effectively against national and international racing teams with world class drivers.

Dave Smith, UK Key Account Manager at Bowers Group said: “We are absolutely delighted to be working with the University of Wolverhampton Race Team (UWR). This is a fantastic opportunity for us to engage with the future talent of engineering and manufacturing, capturing student’s imagination and interest in metrology as part of their wider University education. As part of our sponsorship, we will be providing the University with a selection of metrology equipment, much of which will be perfect for use in the racing team, and giving students a head start when it comes to being familiar with the tools that will be invaluable to them during their future careers.”

Terry Gibson, Fundraising and Sponsorship Manager for UWR said: “We’re very pleased to welcome Bowers Group as an official sponsor of the University of Wolverhampton Race Team, and it’s great to have them on board. We’re trying to give the students the opportunity to interact with industry that will set them up for success in their future careers. So, we’re getting them used to product requests and orders, understanding lead times, and developing their soft skills. It’s not just about learning the subject in the classroom, it’s about applying that knowledge in a real world environment. Giving students the opportunity to be part of the racing team instils a strong sense of discipline and teamwork that they can take into their future careers.”

First year Automotive Engineering student Thomas Archer said: “Being a part of the University of Wolverhampton Race Team really enables students to learn what it’s like to be immersed in the industry. There’s no quicker way of forging a career in the automotive industry, everything we learn is so relevant and we are already being exposed to industry leaders in the world of motorsport.”

Students currently own and race a variety of cars including a Formula 3 Dallara F308 with a Honda Mugen engine that will run in the 2019 F3 Cup, and an IMechE Formula Student car which has been designed, built and driven every year by students in the UK Formula Student event at Silverstone in July. In addition, the students own and race two Morgan Plus 4 Clubsports that run in the 2019 AR Motorsport Morgan Challenge as part of a development program with Morgan Motor Company, and a Formula Renault 2.0; UWR’s debut car which was successfully run in the 2015 Monoposto 2000 Championship and is still used for teaching and testing.

UWR has had strong performances in all the competitions it has raced in. Over the previous three seasons, UWR has been runner-up in the MSVR F3 Cup twice, and placed 3rd in 2018 by just 3 points while their Morgans took 1st and 2nd place in class in 2018. They regularly race at world famous tracks including Brands Hatch, home of the British Grand Prix, Silverstone, and Donington Park.

An investment of £10 million in the University’s engineering facilities at its Telford Innovation Campus in Priorslee has created world class education facilities for engineering students including industry standard design, development and testing facilities. Students from across the School of Engineering and the wider University test, prepare and race the cars, learning all the skills required to be part of the highly competitive world of motorsport.