Joining a roundtable with the US government’s Department of Commerce to discuss US/European Union trade arrangements on the second day of the Hannover Trade Fair, Analog Devices urged both sides to step up efforts to break down non-tariff barriers to trade in technology components and systems. 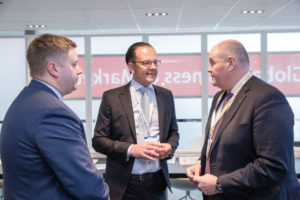 Analog Devices, a global manufacturer of semiconductor-based technology solutions and systems, told Patrick Wilson, Office of Business Liaison Director at the Department of Commerce, that regulatory burdens imposed by both the EU and the US impeded the transatlantic exchange of components and systems in important markets for high technology such as industrial and building automation, communications, automotive, and aerospace and defense equipment.

The Department of Commerce invited Analog Devices to participate in the roundtable discussion at the Hannover Trade Fair (Hannover Messe, 1-5 April). It was part of a four-month long consultation organized by the Office of Business Liaison, the goal of which is to help US trade negotiators better understand the issues that US exporters and multinationals, such as Analog Devices, face when doing business in the EU.

This consultation follows a pledge made by President Trump in October 2018 to negotiate a trade agreement with the EU. Trade between the EU and the US is worth some $1.1tn a year.

As part of his consultation with large US-based multinationals, Patrick Wilson visited the Analog Devices booth at the Hannover Messe, which had earlier been on the route of a tour of the exhibition made by Germany’s Chancellor Angela Merkel. Mr Wilson saw how the company’s sophisticated solutions consisting of semiconductor hardware and software, including embedded artificial intelligence, are integrated into robotics, wind turbines and smart asset management tools.  End products such as these depend on a fast-moving and intricate transatlantic supply chain for high-technology components and systems.

Analog Devices’ representative at the roundtable, EMEA Senior Sales Director Josef Lechner, said to Mr. Wilson that while electronics components such as semiconductors were not subject to damaging tariffs, compliance with onerous regulations such as the EU’s General Data Protection Regulation (GDPR) or the US’s International Traffic in Arms Regulations (ITAR) inhibited the export trade in technology components and systems.

Mr Lechner told Mr Wilson that Analog Devices would like to see ITAR compliance streamlined for certified companies operating in member nations of the NATO alliance.

Analog Devices also called for EU funding for technology and innovation initiatives to be available as readily to the European subsidiaries of US companies as it is to large indigenous European companies.