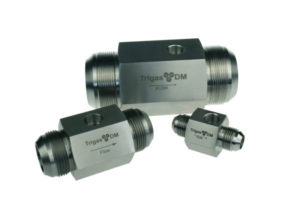 Flowmeters are often chosen according to the specifications as listed within the documents supplied by the manufacturer. It is only later, when the instrument is being used under actual operating conditions, that an engineer can assess the validity of those specifications.

At this point it is important to state that the efficacy of a manufacturers specifications at calibration conditions is not being questioned. However, the unknown variables (from a manufacturers point of view) of an actual application can sometimes have an impact on the measured results as seen from the engineers point of view. Differences in accuracy under actual operating conditions can be significant and from that latter point of view can differentiate between a “highly accurate device at calibration conditions” and a “highly accurate device in my particular application”.

Turbine 2 is specified in the manufacturer’s leaflet for hydraulic oil applications. Accuracy should be better than 2% OR (Of Reading) for viscosities between 0… 100 mm²/s. It has a 4… 20 mA output, which is scaled over 0…120 l/min.

At a low viscosity of 10 mm²/s (blue curve) flowmeter 2 stays within the 2% accuracy limit at above 90% of the range. But at the low flowrates deviations increases up to 30%. This may be acceptable if the customer is not running the device in the lower 10% range.

However, performance deteriorates as the viscosity increases to 50 mm²/s (white curve). Below 75% of the range the deviations rise above 2% and up to 34%.

Clearly, the higher the viscosity, the worse the deviation. It is possible that this variation was not envisioned when the engineer originally studied the sales brochure. Should he operate the device at two different viscosities his measured results will vary between 70% (at about 12% of the range) and 2% (at 100% of the range).

It can be argued that making these comparisons by using the analogue output of the flowmeter is not a valid criterion for judging the performance and quality of the flowmeter as there is an additional A/D conversion involved.

For turbines in oil applications of varying viscosity, TrigasDM applies a UVC calibration. Multiple calibration curves are generated within the viscosity range that the customer expects during operation. The data is then combined into a Universal Viscosity Curve (UVC) which is used by the electronics to compensate in real time for changing viscosities.

Of course, it can be argued that UVC principles could also have been applied on flowmeter 2 – even though the manufacturer does not offer this option. In order to maintain the fairness of the comparison, TrigasDM also applied the UVC to flowmeter 2.

Engineers who are looking for flowmeters for oil applications should talk to their suppliers in detail about the accuracy at changing viscosities. As seen however, advanced modern turbines, which are specifically designed for applications with changing viscosities, meet many all of the requirements of high technology flowmeters in relation to a long-life, low pressure drop, high accuracy and proven reliability.