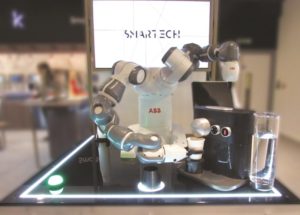 The Selfridges store in London’s Oxford Street has long been known for showcasing the latest innovations. Throughout its 109-year history the famed department store has played host to a variety of new technologies including the Bleriot XI airplane, the first to cross the English Channel; the first ever public demonstration of a television set; and – more recently – connected devices for the Internet of Things.

This spirit of innovation will continue when the store takes in its first ever robot, ABB’s YuMi dual-arm collaborative robot, to serve customers freshly made cups of coffee.  Nathalie Bernce, CEO, Smartech:  “We are thrilled to bring life to the Coffee Barista by YuMi at our new expanded store in Selfridges. Smartech is all about offering customers the latest in innovation and creating unforgettable experiences around the best tech brands in the world. We hope this exciting  collaboration  with ABB will not only help people to discover the new era of robotics but hopefully change the way humans and robots interact.”

Making and serving coffee is just one of the many tasks that YuMi can handle. Short for ’You and me, working together to create endless possibilities,’ YuMi has opened new possibilities in robotic automation since its introduction in 2015. The robot was designed to share tasks alongside human co-workers without cages or fences, while working safely – even in the event of unintended contact.

Combining people’s problem-solving abilities and adaptability for change with a robot’s tireless endurance for repetitive tasks helps make factories more flexible. This is especially important for today’s manufacturing, where goods are increasingly made in small lots of greater diversity. YuMi was designed for small parts assembly applications, where it can work with high accuracy for tasks such as assembling smart phones, packaging wrist watches, or handling the many fine electronics that go into electric vehicles.

YuMi’s technical innovations include a mix of functional and safety features, from motion control software to an ergonomic, lightweight design with 14-axis agility. Despite YuMi’s dexterity, there are no pinch points where fingers might get hurt and its lightweight, padded arms can cease operation in milliseconds if necessary, keeping human co-workers safe at all times. YuMi can also be equipped with vision systems and dexterous grippers  and sensitive force control feedback which enable it to effectively see and feel the objects it is handling.

YuMi’s innovation has already captured the imagination of the public. In its three-year career, the robot has met heads-of-state, appeared in a television commercial and helped launch a new car, and even conducted an orchestra during a live performance by Andrea Bocelli.

YuMi is also being used to help attract the next generation of engineers and robot operators, with the robot being toured around schools and colleges throughout the UK to show students what can be achieved with modern, collaborative robotic technology.

“Robots as a whole are always captivating to watch, and always manage to draw a crowd, yet YuMi always seems to be particularly popular,” says Per Vegard Nerseth, managing director of Robotics for ABB. “From young children to seasoned manufacturing experts, YuMi is helping people of all ages to understand the important and increasing role robots will play in our future.”

You can meet YuMi in the Smartech store at Selfridges in Oxford Street, from August through to the end of December 2018. To find out more, visit https://new.abb.com/products/robotics/industrial-robots/yumi.