An alternative to permanent structures, ABB’s ‘plug and play’ E-house will save time and reduce costs involved in the delivery and housing of critical electrical equipment for the modernisation of the Sao Paulo pipeline. 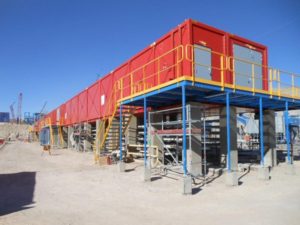 ABB has won an order from the SACS/NIPLAN construction consortium to supply an E-house to support the modernisation of the São Paulo pipeline network in Brazil.

E-houses are prefabricated, modular outdoor enclosures designed to house a range of electrical and automation equipment. Requiring less time to install, commission, deliver and start up, they offer a faster alternative to traditional on-site concrete or brick-built constructions but can still be designed to meet specific requirements of the user. Costing typically 20 per cent less than permanent structures and offering up to 60 percent reduced footprint, they are a highly cost effective ‘drop and deliver’ electrical housing solution.

ABB will provide E-houses for the 47 pumping stations along the pipeline, spread across 47 kilometers, connecting a station being built in São Bernardo do Campo to the Capuava Refinery (RECAP) in Mauá in São Paulo.

Produced at the ABB plant in Sorocaba, near São Paulo, the E-house is 112 square meters, uses special anti-corrosion paint and is the only one in the market with ISO9001 certification. Often needing to be located in remote or harsh terrains – typically where pipeline repairs must be undertaken – ABB E-houses have been developed to withstand aggressive environmental conditions, such as material corrosion, to reduce future maintenance costs.

“The ABB E-house, including all its components, is tested before shipping, which minimises risks in the field, says Adriana Guillen, sales manager of ABB Brazil’s Oil, Gas and Chemicals division. “Its mobility makes it easy and cost effective to install and relocate.  E-Houses can be installed close to the main loads which reduces the power and control cable size and length. By being close to the loads the energy cost is also lower.

“The equipment brings us the advantages of reducing construction turnaround time and optimizing space, as it comes pre-tested and commissioned, mitigating risks and accelerating the project kick-off.”

ABB says the project is significant because it represents an upturn of investments in the oil and gas sector in Brazil, particularly as currently e-houses are engineering solutions used mainly in pulp and paper mills, mining, chemical and naval industries.